“Forward play as the first consideration, the basis upon which the actions of the whole team should be built.”

The words above, taken from the Boys Own Annual 1915/16 leave little room for interpretation on what side of the great rugby union dividing fence President WTA Beare sat! As already discussed in our previous blog, his playing service to the Saracens club was beyond question, with numerous stints as captain on his record.

He served as President of Saracens between 1896-1918, a commitment to the club all the more admirable, given his numerous journalistic callings.

The Birmingham Post described him as “for many years the president of the Barbarians Rugby Football Club.” Given it was not a formal position until 1913 this could only have been in a less official capacity, and sadly appears to have little other supporting evidence. EHD Sewell on 19/12/1914 would trumpet that 159 Barbarians were already in Khaki, with 4 having met the “honour of the finest death a man can have.” ⁠1 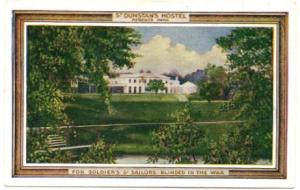 In addition to his service for Saracens, Beare was also President of National Union of Journalists from 1913-14. He has been one of the founders in 1907, and had seen the organisation grow to a membership of 3,500. The Times credits his “valuable work in the interest of the profession to which his own organising powers greatly contributed.”⁠2

His considerable journalistic powers were also turned towards supporting fundraising efforts for the St Dunstan’s hostel for the blind.⁠3

Despite there being no mens rugby played following the season’s abandonment in 1914, the sport was never far from his mind. In ‘The Boy’s Own Annual 1915/16’ he had much to say on forward play:

“In some quarters in recent years there has been a tendency to make Forward play subservient to Back play, but I am of the school which regards sound Forward play as the first consideration, the basis upon which the actions of the whole team should be built. Forwards are all too often taught nowadays that their duty is to get the ball in the scrum and heel it out to the backs with the greatest celerity.

“Heeling has become so inherent in the modern game that it would be futile to decry it, however it annoys me to see a forward dangling one leg in the often vain hope of heeling the ball, better to have both feet planted firmly on the ground.”

On those in the backline, he was far from complementary:

“There is a great tendency amongst backs that once they have got rid of the ball, they slacken pace and for the moment drop out of the move, this must be avoided.”

He was, though, a pragmatist:

“a coach must be aware of the physique and temperament of his players before determining whether they should play an open attacking game or rely on a strong forward game to secure victory”.⁠4

It was not simply rugby he talked of however. Writing in the same ‘Boys Own Paper’ he described:

“War is the serious, vital thing of which all our games of antagonistic are but imitations: imitations designed in part by way of amusement and recreation, but also essentially as part of the process for preparing the individual as a mode of training and hardening him, for the real, grim business of warfare.”

Characteristically, he did not simply sit back and write during the period of the war. He undertook a role in the “Fleet Street Company of the volunteers” and it was whilst training for this on the 24th May 1918, according to the Liverpool Echo that he succumbed: “[his] failure of health was due to a breakdown whilst in training as a volunteer.”

His obituary recorded in The Times: “For many years he was in the front rank of Rugby football critics, and was himself at one time captain of Saracens, for whom he played at the age of 50.” That he was well regarded within his profession can be seen in the broad copying of his obituary: The Sheffield Daily Telegraph, Western Mail, Pall Mall Gazette, Cornishman and Liverpool Echo to report just a few, all of which mentioned his long term dedication to Saracens.