Saracens opponents this Saturday are the mighty Toulouse, aristocrats of French rugby, and the only team to lift the European trophy 4 times, including in its very first season in 1995/96.

Their place at the top of the top table of French rugby goes back to the early 20th century, winning their first of a record 19 national titles in 1912. The team was inspired that day by their little half back Xavier Adrien Albert (‘Alfred’) Mayssonnié, whose try following a delightful chip and chase, turned the game decisively in Toulouse’s favour. Three times capped by France between 1908 and 1910, Alfred was tragically to be the first international rugby casualty of the war.

Nicknamed ‘Maysso’ (10 February 1884–6 September 1914,) Alfred worked in the family firm before the outbreak of war when he volunteered for service. 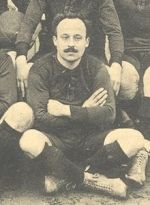 He was appointed a non-commissioned infantry officer and within three weeks, was cited for bravery in an action near the great Fortress town of Verdun, a town that was to witness indescribable suffering throughout the war. He died in action at the Battle of the Marne, making him the first of over 100 rugby internationals, including 23 of the 112 pre-war France internationals, to die during World War I.

His body might, like those of many war victims, have been lost but for his former Toulouse and France team-mate Pierre Mounicq, who buried it while under enemy fire. Two days later a group of five including Paul Voivenel, a doctor, journalist and rugby administrator and Andre Moulines, a team-mate in the 1912 French championship final, marked the spot with a cross wrapped in the Toulouse colours of red and black. The body now rests in the churchyard in his native village of Lavernose, a short journey outside of Toulouse.

The devastation the war bore on the playing strength of the Toulouse rugby club, was considerable, and is commemorated on their memorial wall. The picture below was taken by Colin Veitch, co-author of the Saracens memorial project, who paid his respects to the 79 players featured on the wall during the European Cup match between Toulouse and Saracens in January 2016. Such a beautiful memorial is fitting tribute to the sad reality of the swathe the war cut through the young manhood of Europe. 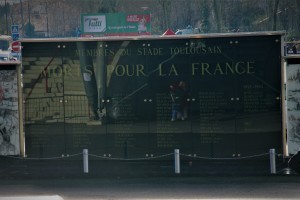 We at Saracens intend to create an equally fitting memorial at the end of our project, so that it hopefully too can act as a suitable memorial to those men that paid the ultimate sacrifice.

For anyone wanting to know more on French rugby and WW1, have a read of the following excellent article by Huw Richards- http://en.espn.co.uk/france/rugby/story/240537.html