War broke out at the height of J.S. Greer’s playing career at Saracens, as we have seen, where playing as 1st XV half-back, he was repeatedly identified as a leading member of the squad.

Once war had been declared, Stanley (as he was known by his family) volunteered for active service at Shoreham on 12th November 1914. A previous member of the army cadet force at the London University South Kensington Campus, which he attended from 1909, he was considered to be good potential officer material, and was assigned to the 8th Bedfordshire (Service) Battalion. Raised in October 1914 following Lord Kitchener’s 3rd ‘call to arms’, the volunteers spent 7 months training in a vast New Army camp near Woking in Surrey. 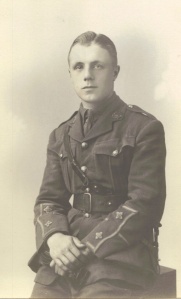 As we have previously noted in our research with our other volunteer Saracens in the Kitchener New Armies, sports continued to play an important role in the preparation and relaxation of the trainee troops. The ‘Bedfordshire Times’ reported the results of the 8th Battalion Sports Day in full in its 31st July 1915 edition, noting that Private H.M. Card & Private Goldstone both won multiple titles in the sprint and middle-distance races. Prizes were also awarded for the Obstacle Race and the Wheelbarrow Race, amongst other events held on the cricket ground at Blackdown camp. Sadly, and as a footnote that is increasingly all too familiar to us, before the end of 1916, five of the eleven men named as prize winners would have lost their lives serving with the Battalion in France…

The Battalion was finally given notice of its deployment and embarked at Chobham Station at 11 pm on 28th August 2015 for transportation to France as part of the 71st Brigade of the 24th Division. Arriving in Boulogne on 30th August, Stanley and his fellow soldiers in the ‘Hungry 8th’ (a nickname used in a letter home from Private 19861 Leslie Worboys) spent 6 weeks in further combat training before the Battalion was transferred with the entire 71st Brigade into the 6th Division – a Regular Army Division that had been fighting in France since 1914.

From this point forward, the 8th Bedfords would serve entirely on the Western Front in France & Flanders, seeing action in major battles that included Loos in September 1915, at Flers-Courcelette on the Somme in 1916, in Morval and Le Transloy later that same year, plus at Hill 70 and Cambrai in 1917. They were also one of very few ‘New Army’ Battalions to have been in the line at Loos when the German forces first released phosgene gas, incurring hundreds of casualties on that day.

Stanley had been swiftly promoted to the rank of Staff Lieutenant 1st Class for the Battalion, and his administrative and organisational skills appear to have been fully utilised to meet the daily operational and logistical challenges of the 8th Bedfords. According to his modern-day relatives, he did pen a number of short messages and letters home to the family, assuring them of his health and well-being, and confirming that he was extremely busy. 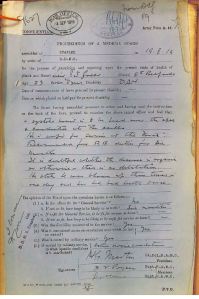 Approximately 670 officers and men from the 8th Battalion lost their lives during their service during WW1, with a further 2,800 wounded on the Western Front. These casualties included Stanley, who was wounded on 30th August 1915 and then again around Christmas that year. He was subsequently declared unfit for active service for a period of 6 months on 19th August, 1916 in the medical camp at Etaples. The Doctor’s note states “He states he was blown up three times in one day and has had bad health since“…his identified symptoms included ‘DAH’ (disordered action of the heart) and TB is also mentioned. These pressures on his health led to him being transferred out of the Bedfordshires and a new appointment as Assistant Musketry Officer at the No.1 Training Camp in Etaples.

Thereafter, Stanley’s duties appear to have kept him largely out of the front-line, his relatives have surmised, and a further promotion on the General Staff reinforced the valuable role he was fulfilling on behalf of the 16th Brigade – a position he was to hold until the end of the war. He was transferred to GHQ 3rd Echelon at Etaples, and recommended for the post of Captain on 1st May 1918.

Stanley served until the Battalion returned to England and was subsequently disbanded in 1919, returning to civilian life as an accountant. He had served his King and Country for a total of 3 years and 9 months, and was awarded his commemorative Victory Medal & Star in 1921…..the same season that he was to earn another significant honour for outstanding performance in the field….his Saracens Honours Cap!

We are very grateful to Stanley’s relative, Peter Greer, for his support and insight in building this profile of our former Saracen. Follow J.S. Greer’s major post-war contributions to the rebuilding of rugby at Saracens in our next chapter, as we uncover and share the life story of this remarkable man…

One thought on “John Stanley Greer Goes to War…”