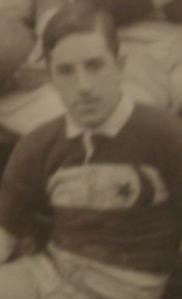 We have followed Sydney Sylvester from his debut at Saracens, through his volunteering for service with the 10th (Service) Battalion Royal Fusiliers (aka the ‘Stockbrokers Battalion’) in 1914 and his subsequent experiences in training camp as the Battalion prepared to be sent to France. Finally, they received their instructions, and crossed the Channel to Boulogne on 30th July, 1915.

Significantly, as we will see shortly, the Battalion Commander Colonel White paid a visit in the first days of August to the Machine Gun School in nearby Wisques. Each battalion was at that time allocated only 4 Lewis Guns, but with its 550-rounds per minute fire rate, this weapon was rapidly being identified as a crucial way to defend against German attacks, and by 1916 the number had been increased to 8 per battalion.

We have no specific records of Sydney’s service in these initial months in the line with 10RF, but the Battalion was assigned to the Grenas region, south of Arras, to relieve some of the French forces.

The Stockbrokers sustained their first casualties here as they rotated between the front line trenches and the reserve lines, typically on a rotation of 6 days in each, followed by 12 days at rest, before the cycle restarted. Once again, David Carter’s excellent book gives full details of their movements, including valuable first-hand insights from surviving correspondence home from serving soldiers.

In one of these, Alfred Mills records on Sunday September 26th how fortunate the Battalion had been, not to be called up into the costly Battle of Loos. Instead, they had been able to pass the day in a more relaxed style “Played football and cards, after Church service”

For so many of the WW1 Saracens we have researched, their war-time experiences are completely undocumented. In Sydney’s case, however, we have an absolute wealth of information regarding the fighting around Monchy-le-Preux in which he played a significant part. This is entirely due to the generation of an extensively detailed memoir by Australian volunteer Rupert Stanley Whitemen, who served in ‘C’ Company with Sylvester. ‘Whitey’, the Sydney Morning Herald reported “..went to Europe on a business and pleasure trip last June” but stayed on in Europe upon the outbreak of war, and joined the ‘Stockbrokers Battalion’. In the post-war years, this memoir received extensive additional commentary from Sydney Sylvester, whose hand-written ‘Preface’, extra narrative pages and annotations shed some remarkable additional insights into the raging battle that was to end his war…

The 10RF were part of the combined assault on the German lines, dug in around the village of Monchy-le-Preux, east of Arras. The area had been occupied by their forces since October 1914. The attack commenced on the morning of 9 April, 1917 following a major allied artillery bombardment. Writing retrospectively in his ‘Preface’, Corporal Sydney Sylvester recalled that “the attack on Monchy in the Battle of Arras was not by any means the worst of our experiences in France, but it was the first time we had broken out to open warfare from the mud and blood of trench warfare“. By the 11th April, after Whitey & Sydney had narrowly survived a shell burst that had killed 11 of their group of 15 who had been searching for wounded colleagues, they witnessed an extraordinary sight…as two British tanks advanced towards the village, the Germans started to withdraw….

Sergeant Whiteman described the moment as the massed Allied troops charged forward in memorable terms: “Along the street and up the hill the crowd surged; it was a similar crowd that one sees issuing from the gates after a football match. All bayonets had been fixed before getting out of the trench but I don’t think anyone had occasion to use them“. Monchy had fallen…but the battle was far from over.

As the 10RF and soldiers from other regiments pursued the retreating Germans across open fields, Sydney led his two Lewis gun teams to the shelter of a stable, from which he had an excellent field of fire into the valley. The Germans began to re-group, and the Allied forces began to sustain significant casualties from their artillery barrage. As the German troops began to counter-attack, Sydney instructed his party to open fire, hitting the crew of a field gun and forcing the advancing soldiers to take cover on either side of the main road. However, his concealed stronghold now attracted the concentrated attention of the German forces and as he recalls in his narrative “Eventually the German field gun got a direct hit on our left-hand Lewis gun position and I came to with both legs out of action and left arm also useless“.

Worse was to come…as Lance Corporal Jep Graham picked up Sylvester to carry him back into the stable, Sydney was hit again, this time by a sniper’s bullet. Graham told Sydney that they had orders to retire, but that he would notify the stretcher-bearers where he was. However, “none came, and I laid there two days (as I reckoned afterwards)“.

Finally, on 13th April, Sydney was discovered by troops of the 1st Essex, who evacuated him to their First Aid post. “My thigh had gone septic and had swollen like a balloon” he recalled “so I had a big injection and was rushed down to the advanced hospital in Arras for an immediate operation“. A further operation followed in the Australian hospital in Boulogne, and on April 20th, Sydney was put on-board a hospital ship “for Blighty“…however, he notes wryly that “There were 3 hospital ships set sail from Boulogne in line ahead. I was in the first & the middle one was torpedoed and sunk with all hands – another near miss for me!” Against all the odds, Sydney had survived!

However, the story of Sydney’s remarkable contributions to both Saracens and public service do not end here…Whilst he recuperated in Norwich hospital, he learned he had been awarded the Military Medal but recorded in his narrative that he “never heard why“! He was officially discharged by the army on 24th September 1917, and headed home to 148 Maidstone Road, New Southgate with his Statement of Services document stating that his character was ‘Very Good‘.

Back in April, as the 10RF rested in Bunneville prior to the battle for Monchy which was to follow, ‘Whitey’ records that “the mornings were devoted to drill but the afternoons were given over to football and other sports“. In his annotation to this passage, Sydney has hand-written “Where Sylvester played his last game of rugger“.

However, fortunately for Saracens, he would not allow his injuries prevent him making a contribution to the rebuilding of the club in the post-war years. He is named in the Club’s 50th history as one of the ‘nucleus‘ of pre-war players who helped “to face the extraordinary chaos which was the aftermath of four year’s warfare” and bring rugby football back to Saracens in the 1919-20 season.

One could imagine that this young man might look back at his WW1 experiences and consider proudly that he had done his fair share for King and Country, and move towards a quieter life, claiming his new 30/- shillings pension…However, that mental approach seems never to have entered Sydney’s mind – neither on the rugby field nor in his military service! So, we should not be surprised to learn that after the First World War, Sydney learned to fly and joined the Royal Air Force!

“Between the two wars I learned to fly aeroplanes & when World War II broke out, after a brief period in the Royal Observer Corps, I was given a commission in the R.A.F.V.R. Training Command, teaching the youngsters to fly and also an instructor in Gliders. Eventually I was appointed a Squadron Leader on the Staff of Training Command at the Air Ministry. Lots of flying + a wonderful time in World War II”

Sydney passed away in 1983 and now lies at rest in New Southgate cemetery, in close proximity to the rugby club that he clearly valued so highly from a very early age. It has been an absolute pleasure to share the story of this remarkable Saracens player! Our sincere thanks to Sydney’s grandson, Stuart Sylvester, who has been so helpful in providing background material on his grandfather’s life and achievements.