Picking up Dearing’s story from our opening chapter, he was not one of our Saracens players to join the first rush to enlist. Given his status as a teacher, this ‘scheduled occupation’ along with clergymen and some industrial workers meant he would have been able to stay at home for the duration of the war, even after conscription in 1916.

However, he joined the London Rifles on the 1st April 1915.

Having undergone his training, he was shipped out to the Balkans on the 14th July 1915, as part of the General Headquarters (GHQ) and potentially separate from the rest of the battalion.

opens up the possibility of a Saracen serving on the southern front, an element of the conflict in which Britain’s involvement has been often forgotten. The Front did not have the poetry and mud of the western front, calamity of the Dardanelles, or Eastern mysticism of T.E Lawrence, but was an important deployment for British and French troops in 1915. Backing up the Serbian army, which until 1915 had successfully held off the much larger Austro-Hungarian forces, the support allowed for an orderly retreat into northern Greece. The Serbians remained a viable fighting force and in 1918 formed a key part of the Vardar offensive.

Returning to France, and resuming its own identity, the 1st London Rifles Battalion was in the thick of much of the action on the Western Front:

It was in the winter of 1917 that Dearing was to win his Military Medal, where “he tirelessly repaired lines to keep communications between the front line and HQ throughout the day, all through intense bombardment.” This was not the first time his bravery had been noted, being mentioned in dispatches after the 2nd battle of Ypres, and with the medal came a promotion to the rank of Sergeant. He was one of a number of inspirational leaders in the battalion headed by 1908 Olympic Gold medal winning rower Lt Colonel Charles Burnel (photo below Britain vs Hungary 1908).

Having served in every major battle fought by his battalion on the western front, Dearing had proven to be both brave and lucky. This luck sadly ran out for him on the the 23rd March 1918 when he was wounded, in all likelihood whilst defending against the German Spring Offensive, the great gamble launched by Germany, then into its 3rd day. Having been evacuated to hospital in Etaples he was to lose his fight to survive on the 16th April 1918, and is buried in the Lutyens designed cemetery there, the largest in France.

He is memorialised not just by his former University Brunel, but also his old methodist Parish Church – Chapel Field Road, Norwich whose board is below and whom also provided details for this biography. 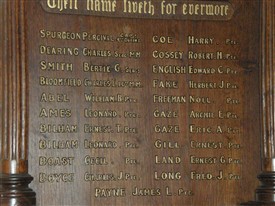 One thought on “Charles Dearing – Our Decorated Hero”