John Stanley Greer was a Half Back of great ability at Saracens, who is first mentioned in the Club’s 50th Anniversary history when playing in the famous ‘England v The Rest’ match between Saracens players on March 1st, 1913.

Whilst the Saracens of ‘England‘ eventually lost the match 6 points to 11 to those playing for ‘The Rest (or, rather, Scotland)‘, JS Greer contributed well for his side. As ORG Williams records, his pass set up a try for his side – “Cuthbert, receiving from Greer, after a good run sent Keith in wide out” – and he undoubtedly was part of a showcase of Saracens talent on display that day, which was duly noted “Both sets of backs indulged in many delightful passing bouts”.

As we will discover, this particular scoring ‘assist’ from Greer was completely in character, and was to prove to be the beginning of a lifetime of voluntary service and devotion to the Saracens Rugby Club. Stanley (as his family always called him) was to serve his country with dedication during the First World War, and would return to play a significant role in rebuilding the Club in the post-war era.

Like his Saracens team-mate Frank Pilley, Stanley Greer was a North London lad from Hackney. His parents John & Eliza were living in Amhurst Road at the time of his birth in 1893, which lies about midway between the modern Emirates Stadium and the Stratford Olympic Park. I am grateful for the insights into the early Greer family life from Stanley’s nephew Peter Greer, whose inputs have been both illuminating and invaluable to building up our picture of this important Saracen from the WW1 era.

John had been born in Colchester in 1860 and met his wife Eliza Partridge in Whitechapel, where they were both contributing to their local communities as Sunday School teachers. After marrying in 1891, their first child Ethel was born in 1892, with John Stanley arriving the following year. John Snr. spent his evenings studying for a degree with Birkbeck College, which enabled him to improve the family circumstances considerably by entering the teaching profession. By the early 1900s, John had been appointed as Headmaster at the Clyde Street School in Deptford, a role he was to hold until his retirement in 1926. By this time, too, the family had moved to 49 Elmdale Road in Palmers Green, close to the Saracens ground behind the ‘Cherry Tree’ public house in Southgate, and 3 further children completed the family line up  – Harold b. 1901, Hilda b. 1903 and Eric in 1908.

Stanley Greer had left school by the age of 17, and by 1911 was employed initially in a clerical role at a paper manufacturing firm. It would have been around this time that he first started playing rugby at Saracens, as he is recorded amongst the points scorers for the ‘A’ XV in the 1912-13 season, where the team finished with a record of P.16 W.7 D.2 L. 2

By the following season, Stanley had established himself as one of the Club’s leading half-backs, and is recorded as playing with Sydney Sylvester v. Twickenham on November 1st 1913 and with Walter Black v 2nd Life Guards on March 7th 1914. He appears in the 1913-14 team photo, is named in ORG Williams ‘best side’ for the season and is credited with 3 tries for the 1st XV during this, the final season before the outbreak of war. 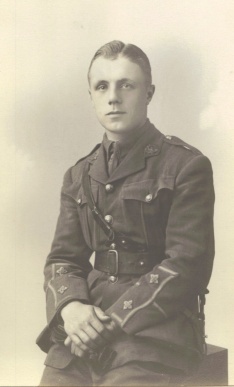 John Stanley Greer in uniform with the Bedfordshire Regiment

However, like so many young Saracens that we have researched, the declaration of war on August 4th 1914 was to change all of Stanley Greer’s plans.

By this time he appears to have moved employment to the London County Council’s Department of the Comptroller,from whence he responded to Lord Kitchener’s call for volunteers in October 1914, and joined the 8th Battalion of the Bedfordshire Regiment, a ‘Service’ battalion raised for the duration of the war. He was just 20 years of age.

Following 7 months of training near Woking, the 8th Battalion were deployed to France, arriving in Boulogne on August 30th. The Battalion was destined to spend the remainder of the war serving on the Western Front and would see action in many of the major battles including Loos (1915), the Somme (1916) and Cambrai (1917). We shall follow Stanley Greer’s fortunes during this period in our subsequent blogs.