The Saracens Club ‘Bulletin’ of January 1940 opened its New Year good wishes with the hope that by the end of 1940 Britain and France will “successfully dispose of the side skippered by Adolf Hitler with Goering in the Second row and Goebbels as Leader of the ‘Supporters Club’ ”……Regretfully, the Second World War, as as we now know, was destined to go into ‘extra time’ before hostilities ceased in Europe on 8 May 1945…

Just as we discovered when looking at the Club’s WW1 history, to our surprise (once again) the Club does not have a consolidated record of those Saracens who lost their lives in the service of King and Country in the 1939-45 conflict. We want to put this right.

This is where the #saracensfamily can be of great assistance…You can help us with any stories, pictures or other information you might have. This might have come from family tree research, family photo albums, or half-remembered stories told by a parent or grandparent. Do please share stories from other clubs as well, and of rugby games played by battalions and other servicemen; it all helps build up the bigger picture.

Like our WW1 research, this is likely to be a multi-year project, culminating hopefully in the identification of a list of Saracens players who served in WW2. By writing their biographies, we hope to help pay tribute to those who fought & fell during the conflict – commemorating this ultimate sacrifice from players who were part of our great rugby club in North London.

What we know so far…

Unlike our ongoing research into the early history of the club and the 1914-18 conflict, we are fortunate to have access to a number of original records from the 1939-45 era. In addition, Hayden Perry’s ‘Saracens Football Club (R.F.U.) 1876-1976’ 100-year history and Robert Huntley’s ‘Saracens – 125 Years of Rugby’ both give short but valuable overviews of the club during WW2, especially concerning the lease and development of the new Bramley Road site.

Information on the players to-date, however, has mainly come from the original wartime ‘Bulletin’ newsletters and press cuttings from these years, fortuitously saved in a box in the darkest corner of the clubhouse! These have already provided a framework for our new research, supplying valuable insights into the names, ranks and actions of many Saracens players from this period.

We have already started to catalogue a list of Saracens players who lost their lives during the war. So far, we have identified 13 players who died in combat whilst serving in the RAF, the Navy and Army Regiments. Two of these men captained the Saracens 1st XV in the late 1930s prior to the outbreak of war. There will, no doubt, be more casualties to report…

The sadness associated with each such discovery must, however, be offset by the first-hand reports of ‘Sarrys’ (the war-time spelling) winning battlefield honours, maintaining their love of the sport, and returning whenever possible to Bramley Road and the ‘Cock’ public house in Cockfosters to reconnect with their team-mates. The spirit of rugby was always at hand, even in these darkest of days.

Saracens was in a strong position as a club in 1939, with c. 400 members. The Club typically fielded 8 or 9 XVs at weekends, with four pitches regularly in use for games.  Easter tours had been revived in 1932 and other social activities are noted as having “intensified.” The 1938/9 fixture list included Wasps, Cheltenham, Rugby, Exeter and the Metropolitan Police – all clubs with strong histories and considerable standing in the game. Saracens were on the cusp of being considered amongst the leading Rugby Football Clubs of the era, but not quite yet a marquee club…

Saracens had finally moved to Bramley Road in 1939, it becoming the 11th ground to be used around North London since 1876. It would continue to provide the warmest of welcomes to Club members until 1995 and is still home to the Saracens Amateur Club.

With the land being leased from the council, a number of controversies had arisen over usage and cost, but undoubtedly the most pressing for any rugby players and supporters was the council’s assertion that “tea should be a sufficient beverage”. Fortunately, good sense prevailed! The other important consideration was to put up sufficient netting along the Cockfosters Road to prevent errant touch-finding kicks alarming motorists!

Following a loan of £750 from the RFU and £1,000 from members the grandstand was developed and completed in time for the grand opening, scheduled for the 61st Annual Dinner on September 16th 1939, after a proposed game against “old friends and rivals” Wasps. The outbreak of war on 3rd September meant, however, that Bramley Road was requisitioned for the greater good, and handed over to the local Middlesex Yeomanry.

The ‘Bulletin’ of 23rd October 1939 reported somewhat gloomily that “The trial games and opening of our new pavilion…did not materialise and from a Club which in 1938-39 ran as many as nine XVs not a single sign of life was seen, its members being scattered far and wide as if the hammer blow of war had smashed the organisation completely”

However, rugby quickly reunited everyone connected with the ground when the newly-installed Middlesex Yeomanry invited a Saracens XV to play their first game of the war-time season at Bramley Road on 14th October 1939. This was to result in a satisfying 17-6 ‘away’ win for the Sarrys, as technically they were playing “as guests, not as hosts”. This was to be the start of a good relationship, with the ‘Bulletin’ reporting that “..it must be said that the Yeomanry Regiment are looking after our property well and have been very glad for us to make several fixtures with them”.

This also meant that all Saracens matches were destined to be ‘away fixtures’ throughout the war – described in the local press as ‘safari seasons’. The Bramley Road playing fields had a lucky escape in November 1941 when, in the name of increasing food production, the pitches were almost ploughed to sow oats. (Every tight five forward worth their salt would, I’m sure, insist it would still be playable!) Fortunately, the threat was lifted in December 1941 and the pitches were ready for the posts to go back up for the 1945/6 season, which the Club completed with results of 15 wins to 6 losses.

Whilst there did not appear to be the same mass rush to enlist as there had been in 1914, nonetheless Saracens players were certainly doing their part.

By 4th January 1940, the ‘Evening News’ was able to publish this cartoon to commemorate that more than 100 players had now joined up. This number of Sarrys in uniform had exceeded 200 by 1942 – an amazing record of commitment.

The players volunteering were assigned across the various divisions of the armed forces. In January 1940, the ‘Palmers Green & Southgate Gazette’ noted that “..9 members are actually with the BEF (British Expeditionary Force) in France, thirty-four are in the Army, 15 in the AARA, 14 serving on the home front, 13 in the searchlights, 11 in the RAF, 9 in the Royal Navy and Royal Marines, six in the OTC and two in the Palestine Police”

However, the Club was recording its first casualty by February 1940, losing a player serving on H.M.S. ‘Cairo’ who “had played in almost every XV since 1927”. Sadly, this was to be just the beginning of the Saracens casualty reports as the war continued…

The Club Kept Playing Fixtures Throughout the War

Unlike the 1914-18 period, there was no complete secession of civilian sports, as it was realised how vital it would be for citizen morale and youth fitness to keep on playing. As early as 24th November 1939, the ‘Palmers Green & Southgate Gazette’ was recording their admiration for the “Local Sports Heroes’” who were “keeping the local sports home fires burning….creating a winning morale in all sections of the sport-loving public”

It was to prove increasingly difficult for the Saracens to field a team though, often relying on players outside of military serving age, as well as those on leave. There was also occasion to borrow players from other sides. With the availability of only enough players for one side, beggars couldn’t be choosers…so the balance of the side was “one week twelve forwards, three backs; The next week the reverse,” meaning there was a perennial sense of Barbarians rugby through the era. (All games were of course friendlies as well, as it should be remembered rugby union did not have a competitive League or Cup system until the 1970s.) 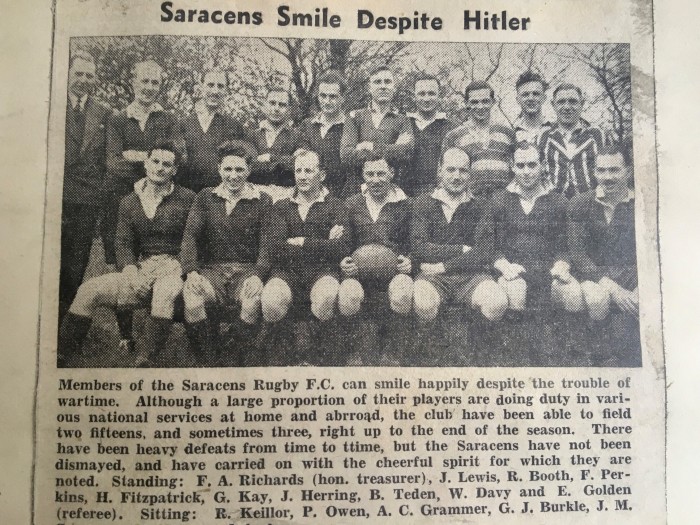 The Club was still winning the respect of the ‘Evening News’ on 12th April 1940 which reported “It is pleasing to think that the Saracens, who have made such a wonderful contribution, over 150 men, to the fighting Services, are still one of the few London rugby clubs still able to run three fifteens a week”. However, by 23rd November that same year, the ‘Bulletin’ confirmed “The playing members remaining are now very few indeed” and suggested (in a very earlier attempt to establish ‘Veterans Rugby’?!) “how about a few 35-40’s turning out to give us some weight?”. By 31st March 1943, the situation was clearly very difficult “The Team Secretary’s job is particularly grim these days, for instance in one match eleven persons arrived after nineteen had been carded”.

Of some of the regular players holding the club together, the presence of future captain Rob Bruce was especially noted. The results of matches are recorded in both the ‘Bulletins’ and the local papers, with Hayden Perry describing the period somewhat charitably as an era in which Saracens were “often beaten, never disgraced.”

What we don’t know yet…

We have just started the WW2 project and would really appreciate your insights. Thanks to the Bulletins and press cuttings, we have some excellent starting points on a good number of Saracens players, plus the basic names and details of many who served. However, our outstanding questions include:

How you can help

We know this is a potentially massive research job, and that we certainly cannot find the answers to any of the questions posed above without lots of help. We welcome any information you might want to share – full articles, pictures of people and memorabilia, snippets of information…any insights at all!

Thanks in advance for any help or support you can offer! We’ll be updating our website and social media channels with new information as it comes to light – please don’t hesitate to contact us!