Saracens’ opponents, Sale, have been and continue to be one of the stalwarts of both northern and Lancashire rugby. Founded in 1861, they are one of the oldest clubs surviving in English rugby and have thrived despite being in the heartland of Rugby League. With Saracens meeting Sale Sharks twice in as many weeks, it is a good time to reflect upon the differences in rugby culture and the evolution of our modern era competitions, as the concept of a national league is still a relatively new entity in rugby’s history..

Saracens fixtures in the early 20th century were for the most part limited to the London Metropolitan area, with the occasional foray out as far as Rugby, and regular tours to the West Country. Whilst only brief details are given about these tours in ORG Williams’ 50th Anniversary history of the Club, it can be quite easily assumed that the noblest traditions of the rugby tour were upheld, as well as that first great rule that details “stay on tour!” A truly ‘national’ competition structure, however, failed to materialise in these years across the rugby union clubs, despite the other codes adopting their own well-organised leagues. 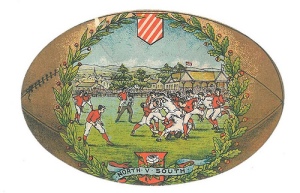 This lack of development of a league structure for clubs in the Union was a deliberate attempt by the RFU to uphold the amateur traditions of the game. Leagues, it was believed, encouraged a ‘win at all costs’ mentality – something that could lead to unsporting behaviour and further encourage the haunting spectre of professionalism….

The rival ’round-ball’ Association code developed the FA Cup in 1871/72 and established their first league structure in 1888, although this league was initially drawn from teams from the North and Midlands. Northern Union, the early name for Rugby League, also had a competitive league structure, which served to help draw in larger crowds. Rugby Union was not to follow suit at club level until 1972 when a National Cup competition was first played. The introduction of the first RFU national league was delayed until 1987.

The idea that there were no competitive fixtures in rugby would be a falsehood, however.

There was a County Championship held every year from 1889 as well as frequent ‘North Vs South’ games, which effectively served as trial games for the selection of the England team. These county games could draw crowds in excess of 20,000, and were often reported on at great length by the sporting papers. This competition continues to maintain its popularity and has now been re-named the ‘Bill Beaumont Cup’, in honour of the former England captain, with Lancashire dominating in the last few years.

Back in 2014, can Sale match the dominance of their home county in these next two critical fixtures versus the Saracens? The positive for Saracens is that the last time Lancashire were beaten was in the 2012 final by…..Hertfordshire! This hopefully bodes well for Sarries for the next two games!