During the course of our research on the Saracens players of the 1914 era, we have become accustomed to tracing their migratory routes from all corners of the UK to North London, where many of them settled as young men, combining employment in the capital with lacing on their rugby boots at Saracens each weekend.

It is therefore a pleasant surprise to find that our 1913-14 1st XV team member, Frank Linden Pilley, is a North London local, through-and-through! That he also made the team this season is even more commendable, given Club historian ORG William’s comments that “at full strength the Saracens had a very powerful side, especially in the back division” where ” a large proportion of the team was composed of young Scotsmen employed in banks“.

Born in Clapton, Hackney in 1886, Frank Pilley was part of a large family with strong and established North London roots. Frank’s parents James & Maria were both also born in Hackney in the 1850s, and had made their home at No. 157 Kyverdale Road, Stoke Newington since the 1880s. James was employed as a commercial jeweller in 1901, and appears to have spent many of his working years as a commercial traveller – a career that Frank, too, was to follow. in 1901, however, at the age of 15, he was already out at work as a Warehouse Clerk.

Frank was the fifth of nine siblings, all of whom seem to have been gainfully employed from their teenage years in clerical or retail roles. Eldest son Sydney worked as a Shipping Clerk, while elder sisters Maud and Mabel are both listed as Draper’s Assistants in 1901. Younger siblings Kate, Fred, Lillian & Ernest, too, were all engaged in a variety of business support roles, including Shorthand Typist, Stockbroker’s Clerk and Ledger Clerk. Overall, with the Pilley children still largely being based at home in 1911, it is hard to draw anything other than the impression of them being a hard-working local family. 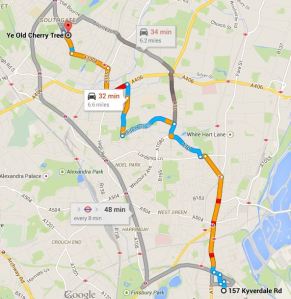 So far, no detailed information has emerged on how Frank Pilley came to join the Saracens. He is credited with appearing in the successful ‘A’ XV in the 1913-14 season, which won 11 matches, drew 2 and lost 7, and is named in the try-scorers for the squad that season.

However, his route from home to the Saracens rugby pitch in Southgate would be a journey very familiar to our many North London members from recent years,and would have taken him past the White Hart Lane stadium home of Tottenham Hotspur FC, which had been completed in 1899.

The outbreak of war in 1914 does not seem to have been a trigger for Frank Pilley to volunteer & enlist, unlike many of his Saracens team-mates. Instead, it appears that he remained in employment, living at the family home in Kyverdale Road, until eventually he was conscripted by the Surrey Recruitment Registrars on 22nd February 1918. He was assigned a role as a Driver for a Reserve Battery of the HAC, and also at this time in the first quarter of 1918, wed his fiancee, Rachel May Weedon.

Frank was to survive the war, and would return to Saracens Rugby Club in 1919/20 as a member of the Committee, charged with rebuilding the Club after the 1914-18 conflict.

We will return to Frank & his team-mates’ war experiences later in the project, as more information is uncovered. Keep checking back to stay in touch with our Hackney Saracen!

2 thoughts on “FL Pilley – Our North London Saracen from ‘ackney!”