Norman Brabazon Dick stands as testament to the old adage of rugby being a “thugs game played by gentleman”. As a Public Schoolmaster, noted chess player, grandson to a peer of the realm and graduate of Sidney Sussex College, Cambridge, he would not have been an obvious candidate to have been roughing it out on a cold, wet and muddy Saturday afternoon. But he was to earn his Saracens colours playing for Saracens in the 1908/09 season, and was a highly respected schoolmaster teaching at Aldenham School.

Norman was born in 1882 in Brighton, the second son to parents John and Leonora (nee. Brabazon). His father John served as an East India Merchant, with some success it would appear from his ability to retire in his early 50’s and still maintain a household with 2 servants. He had married well, matched with Leonora, the second daughter of Anthony Beaufort Brabazon, a Doctor practising in Bath and a Peer of the realm. Unlike his older brother Walter, who was to follow in his father’s footsteps as a merchant, Norman was to forge a career as a schoolmaster. Walter may also have played alongside brother Norman at Saracens, as a W. Dick is also present in the records for the 1908/09 year. 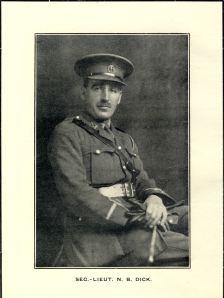 Norman distinguished himself academically from an early age, gaining scholarships to Bedford Modern School, then onto Merchant Taylors- where he was to represent their A side at rugby for two seasons, between 1899-1901. Going on to the hallowed halls of Sydney Sussex College, Cambridge he was to distinguish himself further as a mathematician and continued his undergraduate studies to take a Masters Degree.  Following his graduation he spent a number of years as assistant master at Sutton Valence School, in Kent and also had a role as an army tutor prior to taking up a role as Mathematics master at Aldenham in 1908. There he is noted as continuing to take an active interest in inter-schools chess, and it is during his period teaching there that he was to turn out for The Saracens.

Through the support of Aldenham school it has been possible to trace his records from his time there, all of which indicates what an exceptional mathematics master he was. He had responsibility for the “mathematics of the matriculation form and army class” and is praised by the Headmaster for his “extreme modesty” the fact he was “scrupulous to the finest point” with an “unswerving resolution to carry out what he in the end decided was right.” Further it is noted he had “a great power of controlling boys, without apparent effort,” rather useful for a teacher of potentially unruly boys!

Unlike some fellow Saracens such as Walter Cairns Black, Norman did not get caught up in the initial rush to sign up. This probably owes much to what Aldenham’s headmaster notes as his “apparent hesitation to make up his mind quickly”. However in December 1914, he enlisted in the 16th Middlesex battalion, a battalion with strong links to the Public Schools. His education, and experience as a schoolmaster would appear to make him a prime candidate for officer training, but Norman originally enlisted and served as a private, only “reluctantly” becoming an officer in 1915.

He is certainly not the only example of an educated and eligible man avoiding becoming an officer, in favour of taking his place amongst the ranks. Rosslyn Park Rugby Club player John Bodenham, a casualty on the first day of the Somme offensive, is profiled in The Final Whistle, with author Stephen Cooper questioning his “reluctance to take a commission which, with his education and background, would have been his for the asking?”. With battlefield promotions relatively common, (the most outstanding example being footballer Walter Tull, who was promoted as the first Black officer), it would not be for lack of opportunity that Bodenham and initially Dick refused the commission. No clear answer as to why Bodenham continued to refuse is forthcoming, with only a suggestion that, witnessing first-hand that the officers “look tired” and their “responsibility” fed his reticence. Given that the junior officers largely suffered from the same dangers and privations as the regular soldiers, but with the percentage casualty rate highest amongst front-line subalterns, his reluctance is perhaps understandable.

Two similar examples of educated men amongst the ranks are available from the Saracens Rugby Club, both of whom we have profiled: Alfred Austin Ball and Walter Cairns Black. Whilst Ball’s schooling at the unfashionable Hornsey County may well have limited his perceived eligibility as an officer, he captained the Saracens 1913/14 B side, proving his leadership capabilities. Black had the benefits of an education from Edinburgh University, and admiration as an uncompromising and tough Scottish forward. Whether Ball and Black both actively chose to join the ranking soldiers, or there was simply a lack of space amongst the officers initially, has no hard evidence to support a conclusion either way. The answer may lie though in the fashionability of the regiments they joined; Bodenham enlisted in The Queen’s Westminster Rifles, Ball in The Civil Service Rifles, Black with The London Scottish and Dick in The Public Schools Battalion. All were popular and oversubscribed from the initial wave of recruitment, especially amongst officers, leading to these higher-calibre men choosing to join the ranks rather than seek out other regiments. Given the apparent lack of hard evidence it is hard to make definitive judgement on their motives, but it is an area worthy of future exploration.

We leave Dick, then, in December 1914, enlisted in the 16th Middlesex. Like many of the other new recruits he was to enter a rather frustrating period of training in England, before deployment to the frontline.