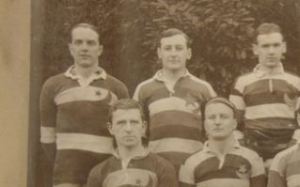 Percy Heddon makes his first appearance in our surviving Club records in the team photo of 1912-13, where he is standing between AL Baker and DH Keith and behind two especially long-serving players CJ Leach and WA Andrew.

His earliest recorded match for the 1st XV was on 26th October 1912, where he played as a forward against Walton-on-Thames RFC. In the return fixture, held on 22nd February 1913, he was again selected and contributed to the 23-8 victory – a rare and highly welcome result, given that the Saracens season finished Played 19, Won 5, Lost 13, Drawn 1, and the 1st XV was outscored by 204 points against to only 102 for Saracens.

Born in Bristol in 1888, Percy William Selman Heddon spent his childhood in the Parish of Westbury. His father, William, hailed from Devon, and seems to have spent most of his career as a Postman, both in Bristol, and then again in Winton, Hampshire, where the family moved to c.1901. Percy moved to Bournemouth school at this point to complete his education; his 15-year-old brother, Reginald, was already out at work by this time, following in the family footsteps, it would appear, as a ‘telegraph messenger’.

Bournemouth School was to remain an important part of his social world post-graduation. He was a member of the school’s opening year intake in 1901, and his interest in sport may well have been assisted by Headmaster Dr. Edward Fenwick (also known as ‘Tig’ – short for ‘Tiger’!) who “had boundless energy and set himself and his pupils a ferociously high standard in everything they did“. With considerable foresight for the era, ‘Tig’ encouraged fitness and well-being to an extraordinary level, as is detailed in his ‘Medals for Big Chests‘ programme!

By 1905 Percy had left Bournemouth School, but had accepted a role on the Old Boys Association Committee. He moved to London to sit the Inter. Science Exam at London University in July that year, ‘The Bournemouthian’ reported, adding “We wish him every success“. By the time of the 1911 Census, he is listed as boarding in Lancaster Road, Finsbury Park, with the Potter family. At this point in his career, Percy was employed as a ‘Clerk Municipal’ with the London County Council Education Department, and it must have been around this time that he first pulled on his boots for Saracens.

In the summer of 1911 he married Lizzie Seymour Yapp in Aston, Warwickshire, but the couple made their home back in London. Percy continued to play rugby at Saracens through to the termination of fixtures in 1914, despite the couple expecting and being delivered of their first child, a son George Kenneth, born in June 1914.

Percy is recorded in the Club’s 50th Anniversary History as playing in both the match against Twickenham RFC on 1st November 1913 and versus the 2nd Life Guards Club on March 7th, 1914. His commitment, hard work and skill does not appear to have gone unnoticed, as he was named in the Club’s “best side”  for the 1913-14 season and is recorded as scoring 2 tries.

Upon the outbreak of war, although a married man and a father, Percy would chose to volunteer and serve in the Army. We will follow his war-time experiences in our next blog.